COVID-19: Interview with Luca Frusone on the Role of Parliamentarians, Allied Cooperation, and Countering Disinformation 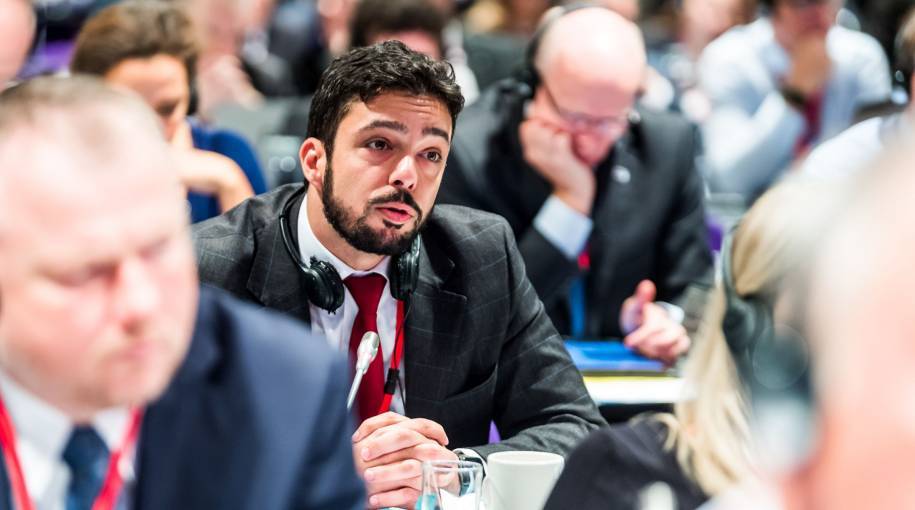 The COVID-19 pandemic brings unprecedented challenges for the Euro-Atlantic community and demonstrates the serious threat of infectious diseases.

To overcome the pandemic, it is crucial to strengthen cooperation between Allies and their efforts to counter propaganda and disinformation and to provide proper guidance to citizens argues Luca Frusone, Head of the Italian Delegation to the NATO Parliamentary Assembly, in this interview. Parliamentarians have a key role in all these aspects, he underlines.

1.    Cooperation between Allies and support through NATO play a vital role in the fight against COVID-19. For example, Allies work together in providing each other with medical personnel and equipment, including through military airlift, and in sharing knowledge and resources. How can NATO and Allies strengthen cooperation on COVID-19 and similar health crises in the future?

The support of an organisation such as NATO is crucial in the case of scenarios like the one we are facing with the COVID-19 epidemic. The work done by the Euro-Atlantic Disaster Response Coordination Centre (EADRCC) has been the first example in this respect. Apart from the material assets it can deploy, the value of NATO lies in its being a forum for exchange and support between the various countries. In light of its political and military nature, NATO can respond faster than other organisations, because it can cooperate with the Armed Forces of its Member States: as far as Italy is concerned, the Italian Armed Forces have been rapid and reliable when requested to act during this crisis. NATO already has its Force Health Protection Branch and exercises are carried out on possible pandemics. In addition to that, the Civil Emergency Planning Committee (CEPC) also plays an interesting role in terms of increasingly sharing best practices in order to ensure the resilience mentioned in Art. 3 of the NATO Treaty, even in the presence of events not resulting from an armed attack but which could put individual countries and the security of the Allies under stress. In the future, it would be useful to enhance this dimension, which does not strictly fall within NATO's mission, but NATO has already shown its adaptation capabilities and could provide this further “protection shield” to its Members. From a purely military perspective, even among the military forces, there have been contagions and victims: hence, more stringent procedures are all the more essential to prevent our deterrent forces from being undermined.

Another aspect of fundamental importance is mobility: NATO has already shown great attention to this issue. Quite often it is seen as a question affecting only the Eastern flank of NATO, while the COVID-19 crisis has shown us that rapid intervention becomes essential and useful with respect to all borders and for different kinds of emergencies, not only of a military nature. On the civilian side, it has made us more aware of how much the resilience of each State shapes and affects its military capabilities: I am referring, by way of example, to essential production in case of conflict.

Apart from the health crisis, disinformation is the biggest problem we are experiencing these days. Because of conspiracy theories and biased information, disseminated thanks to viral contents on social networks, a lot of energy and resources had to be devoted to reassuring and informing citizens properly. In Italy, NATO itself was at the centre of one of these cases in relation to the "Defender Europe 2020" exercise. Unreliable sources described it as a secret mission on COVID-19 and it was thanks to the transparency and reliability of the information that SHAPE had been providing online on the exercise that we were able to disprove that narrative. Most people tend to believe one version of the facts because it is the only one they are told, so we should increase our efforts to explain how institutions take action and what they do, so that we can help raise the quality of debate.

3.    Italy is one of the countries most affected by COVID-19. From your experience in Italy and from the perspective as the Head of the Italian Delegation to the NATO PA, what lessons can Allies learn from Italy to protect their citizens from this crisis and any future pandemics?

Something peculiar has occurred in Italy, something that even those who live here find it hard to grasp. The crisis of politics is now widely known, not only in Italy. In Europe, elections take place one after the other and it is becoming increasingly difficult to form solid majorities. Against this backdrop, citizens lose confidence in democratic systems and especially in their representatives. For some time now this phenomenon has also spread to other circles: even doctors are being questioned by what citizens read on Google. During this crisis, however, people have been relying on the government, have listened to experts, have seen new heroes in medical and nursing staff. A lesson to be learned is that in times of crisis it doesn't matter what you say, but rather what you do. Trying our utmost is the only way to protect citizens.

4.    What role do parliamentarians play in this crisis? What are your goals and priorities?

A key role is that of having a constant dialogue with citizens. Over the last few months citizens have been asking for more information and guidance, so that dialogue with them has been on the rise. A large part of our job is to counter disinformation, not only of a political nature, as disinformation could lead to undermining the policies that were implemented to fight against the pandemic. Today we are working hard on the economic response to the virus; we have difficult months ahead of us, but the biggest challenge will be to rethink our way of life, which has been put into crisis and changed by something we did not think could happen. Today we need to look at this new world with new eyes: so much has happened in recent decades and epochal changes have taken place, with the advent of amazing technologies, but there has not been a real paradigm shift in our lifestyle: this is an opportunity to address this issue.

LUCA FRUSONE, HEAD OF THE ITALIAN DELEGATION TO THE NATO PA