Critical strategic, economic, and energy challenges explored by NATO Parliamentarians in the UAE 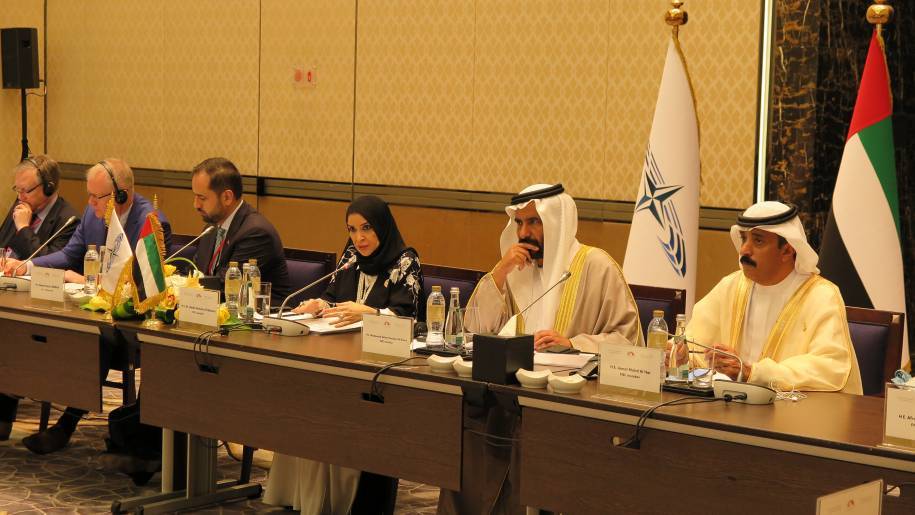 Brussels, 16 January 2018 - In the eyes of its leaders and many experts, the United Arab Emirates (UAE) has become something of a model for the rest of the region. The UAE is both moderate and tolerant; it has established a reliable framework for private sector investment and development; it has developed an important partnership with NATO; and its highly dynamic economy is rapidly diversifying so that it is becoming ever-less reliant on energy exports.

This was a central insight 32 national Parliamentarians from 15 NATO member countries gained during a 9-12 January visit to Abu Dhabi. Members of the NATO Parliamentary Assembly’s Sub-Committee on Technology Trends and Security and the Mediterranean and Middle East Special Group met with diplomats, government officials and academics to discuss the broad geopolitical situation in the Gulf and the foreign, defense and economic policies of the UAE. They also participated in a Joint Meeting of the UAE’s Federal National Council (FNC) and the International Renewable Energy Agency (IRENA) as well as IRENA’s Third Annual Legislators Forum. IRENA’s secretariat is based in Abu Dhabi. The visit was facilitated by the FNC and the Danish Embassy and its Ambassador Merete Juhl, who is the NATO Contact Ambassador in the UAE.

The UAE has felt encircled by Iran and Iranian proxies in Lebanon, Syria, Iraq, and Yemen. It has invested capital, and in some cases deployed its military forces to reduce or manage this perceived threat. The UAE’s involvement in the Yemen conflict, for example, is driven largely by deep concerns about Iran and the risk that ungoverned space might be filled by extremist groups like al Qaeda and Daesh. Finally, like Saudi Arabia, the UAE has, for the most part, vocally supported President Trump’s repudiation of the Joint Comprehensive Plan of Action (JCPOA) which was intended to curtail the development of nuclear weapons in Iran. UAE authorities told the delegation that the JCPOA has, in their estimation, empowered Iran and fed its strategic ambitions.

One historian at NYU Abu Dhabi told the delegation that a generational shift is underway in the Gulf. This as well as mixed signals from Washington have shaped the war in Yemen and the ongoing crisis in relations between Qatar and the other Gulf Monarchies. Both situations, he argued, have not played out as anticipated and are destabilising the region as a result.

The UAE’s leadership has sought to inculcate an ethos rooted in the notion that their country has a special role to play and that this invariably involves sacrifice. The country has suffered serious casualties in the Yemen conflict and have not sought to obfuscate these fatalities. Rather, they are celebrated on a national martyrs’ days.

On the energy front, the UAE is diversifying its own energy supplies despite its huge oil endowment. A large nuclear power station currently under construction will generate 25% of the country’s electricity needs. The UAE has also made major investments in solar power and it hosts the secretariat of IRENA and strongly supports its agenda of advancing renewable energy development. Although it is a major exporter of petroleum, it takes the global climate agenda very seriously and has made major investments to decarbonise the economy. Dr. Amal Al Qubaisi, Speaker of the Federal National Council, told the delegation that her country is preparing for the day when its own oil supplies are exhausted—a day she would be celebrating rather than see it as a source of lament. On the fiscal side, the leadership of the country has made an enormous effort to make the budget less dependent on energy exports.

Dr. Qubaisi also spoke about the empowerment of women in UAE society. She noted that women have assumed major leadership roles in UAE business and government and one third of the country’s Ministries are overseen by women. She added that empowerment of women is essential as no society can fly with only one wing.

The delegation also visited the Center for Cyber Security at New York University’s Abu Dhabi campus. Hoda Al Khazemi, the Director of the Center, outlined the inter-disciplinary research agenda of the center, its multinational staff, and its work with the private sector, governments and a network of universities to develop new cyber security technologies and practices and to share these broadly. The Center is currently working on security forensics, hardware security, smart cities and grids, threat intelligence and network analysis, cyber terrorism, conceptual cyber defense, transportation security, cryptology, and the proliferation of fake news. It is also working on defining what might be meant by cyber peace and the condition under which countries might agree not to wage cyber-attacks.