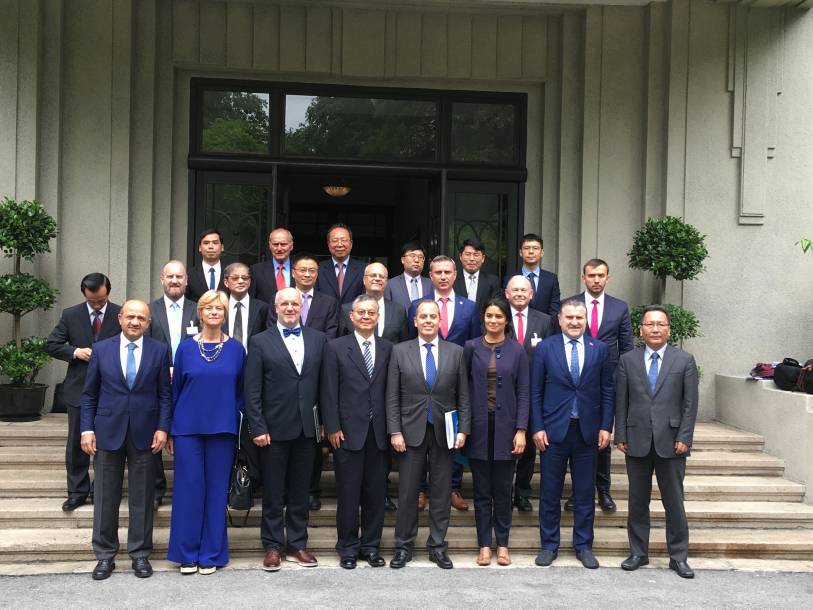 China, Brussels, 21 June 21, 2019 – China’s rapid expansion is a clear global game changer. Its growing economic might affects every dimension of international affairs, including matters of peace and security. To better understand China’s perspective on a range of critical international security issues, a delegation from the Sub-Committee on Future Security and Defence Capabilities (DSCFC) visited Beijing and Shanghai from 10-14 June. Joao Rebelo (Portugal), Chairman of the DSCFC, led the delegation of 13 MPs representing nine different NATO member states.

The visit highlighted significant gaps in perception between China and the West on a number of issues. Chinese interlocutors repeatedly expressed dismay at what they perceived as United States’ aggressive moves in the international trade sphere, which they feared could spill over into other arenas. China has long benefited from international trade practices that have facilitated the remarkable growth of China’s global economic footprint while shielding its domestic market from a parallel rise in international investment. The international community’s goal in conferring such economic benefits during China’s development over the past decades had been to encourage the country to be a ‘responsible stakeholder’ in the international system supporting its rise.

China’s recent actions have led many to believe this policy has failed and that China is instead seeking to shift international norms by its contrarian actions. From its actions over disputed territories in the South China Sea to a lack of leadership vis-à-vis the North Korean nuclear question and the drivers of the ambitious Belt and Road Initiative, international perceptions about Chinese intentions are changing. The United States’ most recent national security strategy reflects this, characterising China as a strategic ‘near peer’ competitor along with Russia, and its new Indo-Pacific strategy strongly emphasises all nations’ rights to the freedom of navigation in international waters.

The U.S.-China trade dispute set the shape and tone of the week of meetings between the DSCFC delegation and Chinese interlocutors from the People’s National Congress (PNC), the People’s Liberation Army (PLA), think tanks, and Fudan University. Facing a European and Canadian delegation, Chinese speakers sought to portray the United States as an unreliable partner with whom any kind of stable deal cannot be struck. As Ms. Fu Ying, Vice-Chairperson of the Foreign Affairs Committee at the PNC, said of the United States’ recent tougher stance toward China: “This is a tiger attacking a panda; the panda just wants to eat and sleep.”

Ms. Fu continued by noting the trade imbalance between the U.S. and China has long been lopsided, with the U.S. selling China mostly agricultural commodities, while China sells the U.S. finished manufactured products. A repeated trope the delegation heard when referring to China’s well-documented theft of technology, however, was “how can we be stealing US or other nations’ technology when our own is better?” Such a rebuke was repeated when referring to the current controversy over the Chinese telecoms firm Huawei’s efforts to dominate planned 5G networks.

An interesting paradox to this repeated defence of Chinese economic espionage, however, was the admission by Ms. Fu, as well as other interlocutors, that some U.S. trade complaints were valid, particularly regarding Chinese violations of intellectual property laws. Still, a prevailing sentiment was that the United States and, by extension, its allies, was trying to bully China now that they are seriously confronted with its successful rise.

China’s role in international security affairs has been increasing significantly alongside its economic rise. Since the 1990s China has been increasingly engaged in United Nations peacekeeping operations, sending over 36,000 personnel on over 30 peace operations over the past decades. China spends more and participates in more UN peace operations today than any other permanent member of the United Nations Security Council.

Investments in a modern and outward looking PLA have also grown significantly. Officials told the delegation China is investing approximately 7-8% of its total budget annually (approximately USD 180bn ) to modernise and restructure the PLA. The results are far more technologically advanced armed forces with global reach across all five domains – land, air, sea, space, and cyber.

Delegation Chairman Rebelo sought to broaden discussions throughout the week to broach the idea of broader cooperation between NATO and China on international security issues, such as international terrorism and counter-piracy, a suggestion met with limited interest. Chinese officials told delegates that China’s position on fighting international terrorism has always been clear and consistent – China will fight terrorism in all of its forms. Chinese interlocutors rebuffed criticism of Chinese counter-terrorism policy, which has come under heavy international scrutiny in recent years due to its policies toward the Muslim Uighur population in Western China.

NATO was not spared from Chinese criticism either, as interlocutors across the spectrum told the delegation time and again that while NATO may claim to be promoting international peace and security; it does so to the exclusion of Russia and China. Interlocutors were quick to note that such exclusion would only diminish the relevance of the NATO Alliance going forward. A key reason, many suggested, was the growing cooperation between Beijing and Moscow at all levels. As Dr. Chen, President of the Shanghai Institute of International Studies (SIIS), told the delegation, “Russia and China’s long-standing disputes have been settled; there is a deep structural change taking place, and China and Russia recognise they have shared values and norms, which will set the tone of future strengthened cooperation.”

Joao Rebelo underlined to Chinese interlocutors on many occasions what he hoped to achieve with the delegation’s visit: “We see a changing global strategic environment that necessitates increased cooperation. Inter-parliamentary cooperation is a clear means to start efforts to mitigate the challenges of the complex global security environment. Despite differing views on many issues, we hope to find the ways and means available to develop a cooperative relationship between the NATO PA and China in the future.” Here again, the suggestion was met with limited apparent interest.

A summary report of the delegation’s visit will be published on the NATO PA website in the coming weeks.