NATO parliamentarians urged to increase focus on Balkans, security in the Eastern Mediterranean during visit to Greece 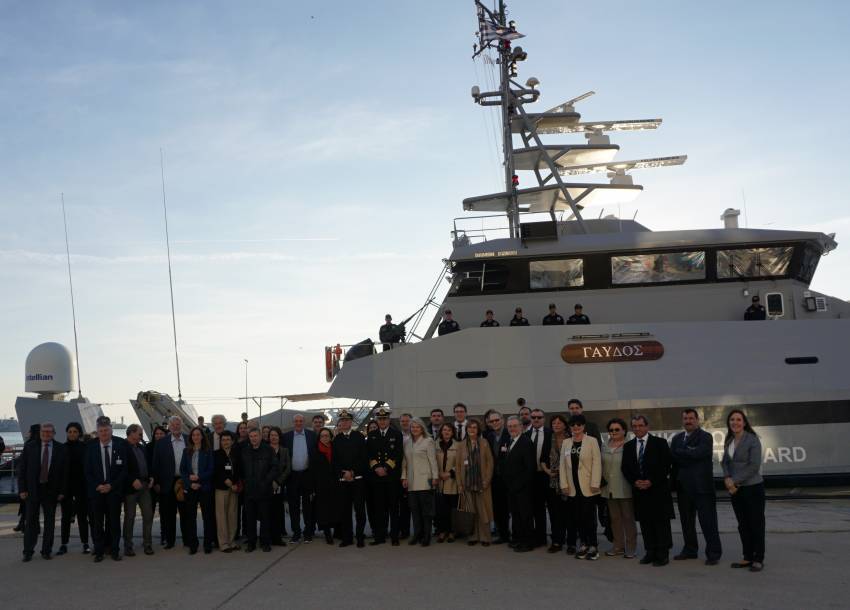 Brussels / Athens, 12 March 2019 - NATO and the European Union (EU) should pay more attention to ongoing security challenges on their south-eastern flank, NATO Parliamentarians heard during a visit to Athens, Greece.  “The Balkans is not the dark side of the moon”, as Christos Karagiannidis, Head of the Greek delegation to the NATO Parliamentary Assembly (NATO PA) stressed, and the stability of the Eastern Mediterranean remains volatile, among others because of the ongoing conflict in Syria and the continuing migration flows.

NATO PA President Madeleine Moon (United Kingdom) congratulated host country officials for their courage and farsightedness in resolving the name issue with neighbouring North Macedonia despite the high sensitivities involved. “I hope the Prespa agreement will contribute to peace and stability in your neighbourhood and in the whole Alliance”, she stressed during a joint statement with Speaker of the Hellenic Parliament Nikolaos Voutsis. Her message was consistently echoed by other NATO Parliamentarians, including participating members of the Assembly of the Republic of North Macedonia.

Border security and the refugee/migration crisis was another key theme of the visit. Greek politicians have stressed that this is the most serious external challenge the country is facing. Since 2015, some 1.5 million people entered Greece’s territory fleeing violence and poverty, the delegation heard. While the numbers have dropped significantly since 2016, the problem remains acute for Greece. Under the 2016 EU-Turkey agreement, Greece must process all asylum requests filed on its territory.  As a result, Greece has become the third country after France and Germany in terms of number of asylum requests received – 69,000 for 2018.  The number of migrants returned to Turkey has been lower than anticipated due to the Greek legal provisions on asylum and lengthy procedures. Many migrants continue to be hosted in overcrowded facilities in Greek islands of Lesbos, Samos and others.

Speaker Voutsis, Minister for Migration Policy Dimitrios Vitsas and other Greek interlocutors called for greater burden sharing and solidarity in dealing with this challenge, including by amending the Dublin regulation in order to reduce the burden on frontier EU member states. They stressed, however, that Greece is determined to treat all migrants with due dignity and to prioritise saving human lives over all other considerations. Greece has enhanced its coast guard’s capabilities to deal with migration movements across the Aegean sea, and works closely with international partners, including Frontex, NATO and Turkey. The coast guard co-operation between Greece and Turkey was assessed particularly positively. All participants agreed that the good cooperation in this area can and should be used to strengthen the bilateral Greek-Turkish relationship.

Beyond these two priority areas, Greece supports the development of stronger Allied defence and deterrence posture on NATO’s eastern and south-eastern flanks, Evagelos Apostolakis, Greece’s Minister of Defence, stressed. While the country’s economic and financial situation remains strained, Greece dedicates over 2% of its GDP to defence, and actively contributes to NATO operations.

Seeing itself as a heaven of democracy and stability amidst the arch of insecurity spanning from Ukraine to Northern Africa, Athens strives to develop a wide array of regional partnership frameworks to prevent further destabilization in the area. These frameworks include tripartite alliances involving, in different configurations, Cyprus, Israel, Egypt and Jordan. In addition, Greece maintains a strong bilateral military co-operation with the United States, including hosting the US Naval Support Activity at Souda Bay, Crete.

Mainly due to longstanding cultural and historical connections, Greek public opinion holds the most positive view of Russia among NATO member countries, the delegation learned. However, Greece supports NATO’s policy towards Russia, and sees its relations with Russia as supporting the dialogue strand of the Alliance’s dual-track approach – the second strand is deterrence. Moreover, even though it has questioned the effectiveness of the sanctions regime against Russia, Greece chose not to break the European consensus on this matter, the delegation was informed. Greek-Russian relations were tested in summer 2018 when Russian intelligence services attempted to sabotage Athens-Skopje negotiations over the name issue. Bilateral relations have since improved, and Greece seeks to develop its political, economic and energy co-operation with Russia.

The NATO PA delegation consisted of 38 members of parliament from 13 NATO member states and 2 delegates from the Republic of North Macedonia, belonging to NATO PA Sub-Committee on Transatlantic Relations (PCTR) and the Sub-Committee of the Democratic Governance (CDSDG). The delegation was co-led by PCTR Chairman Dr Karl A. Lamers, Germany, and CDSDG Chairman Vitalino Canas, Portugal, and included officers of the Assembly’s Middle East and Mediterranean Special Group (GSM) led by Chairman Philippe Folliot (France).

The three day visit on 4-6 March 2019 included meetings with leading Greek government officials, parliamentarians, officers of the coast guard, academics, and representatives of international organisations. As part of its programme, the NATO PA delegation visited the temporary accommodation centres for asylum seekers of Elaionas and Schisto, as well as the offshore Hellenic Coast Guard’s patrol vessel “Gavdos”.