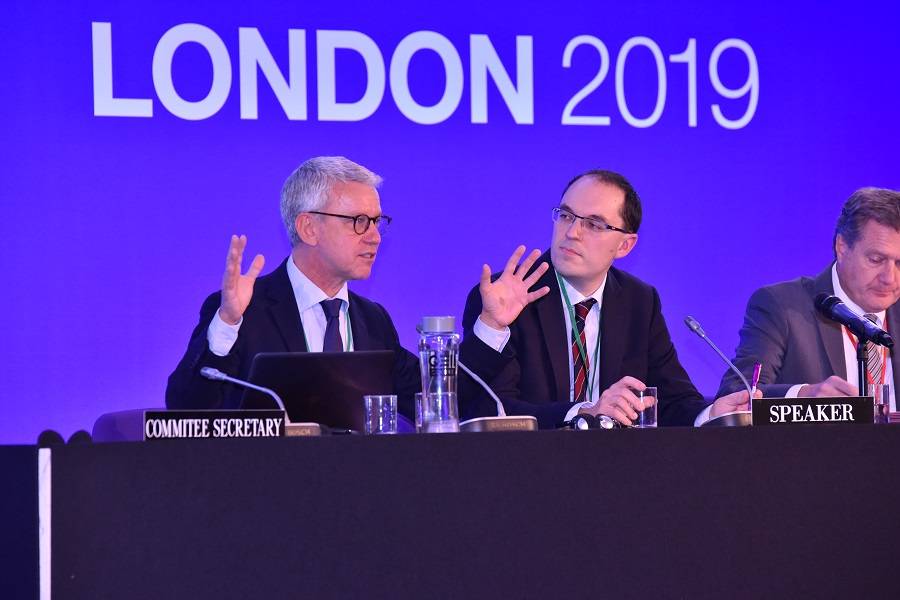 LONDON, 13 October 2019 – NATO Allies were urged Sunday to keep investing in modern nuclear capabilities and to finance important measures aimed at deterring missile development by Russia since the demise of the Intermediate-range Nuclear Forces Treaty.

The United States withdrew this year from the landmark 1987 bilateral pact due to Russia’s violation of the treaty with the development and deployment of the new SSC-8 missile. NATO Allies believe the system contravenes the INF treaty, which is considered a cornerstone of European nuclear security.

The treaty bans production, testing and deployment of land-based cruise and ballistic missiles with a range of 500-5,500 kilometres (310-3,400 miles).

As the pact was unravelling, NATO Secretary General Jens Stoltenberg announced that NATO allies were stepping up military exercises and intelligence sharing, as well as air and missile defence plus conventional capabilities, to respond to Russia’s missile moves. Other measures could follow.

Leading debate on a draft resolution on the future of arms deterrence and control – expected to be adopted on Monday – Day underlined that “Allies must stand behind and resource the new defence and deterrence measures” announced so far.

The resolution notes China’s focus on nuclear capabilities, which are predicted to double over the coming decade, as well as developments with North Korea and the threat that Iran might develop such weapons, and how these events complicate efforts at arms control just as the Strategic Arms Reduction Treaty, New START, is due to expire in 2021.

Bruno Tertrais, Deputy Director of the Strategic Research Foundation, urged the Allies not to copy Russia’s actions and he held out little hope that Moscow is unlikely to sign up to any new form of arms control treaty soon.

“Our response should not necessarily be something that mirrors what Russia is doing. This is not the Cold War, we are trying to avoid a new Cold War,” Tertrais said. “Russia will come back to arms control when it believes that it’s in its interest to do so. To have more predictability about what the United States is doing and to cap, if possible, some of the capabilities that the Unites States or other countries, are developing.”

“Unless there is a dramatic reversal of Russian policy, we’re in this phase for a few years at least,” Tertrais told the committee.

Tom Plant, the Director of Proliferation and Nuclear Policy at the Royal United Services Institute, said that he sees little interest in Russia rushing ahead to develop new weapons.

Plant said that, in an unrestrained world, Russia “comes up worst every time. Every time you run that future calculation as to who’s going to have what in the balance of forces, the Russian industrial base is not going to be able to keep up with the state of modern technology advancement.”

He also warned that current treaties had not successfully established penalties for any breaches, and that new texts must better take into account how to respond to any violations.
“I think we’ve potentially got quite good at detecting violations. I’m not sure we’ve got too good at thinking about what we were going to do about it ahead of time,” Plant said.