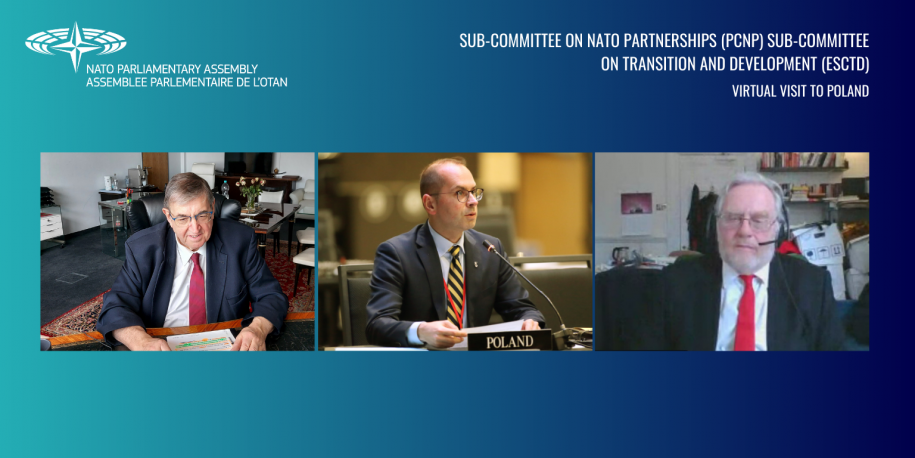 From Poland’s perspective, Russia continues to pose the most serious threat for the Euro-Atlantic Alliance. Russia is bolstering its military capabilities right at the NATO doorstep while the exclave of Kaliningrad remains the most heavily militarised space in Europe.

Russia is relying on disruptive technologies, including new hypersonic missiles, capabilities to disrupt the sea lines of communication and A2/AD (anti-access and anti-denial) capabilities, Pawel Jablonski, Poland’s Deputy Minister of Foreign Affairs, told members of the NATO Parliamentary Assembly (NATO PA) who participated in a series of online meetings with Polish officials and experts on 12-13 April.

Some 22 legislators from 12 NATO countries, members of the Assembly’s Sub-Committee on NATO Partnerships (PCNP) and Sub-Committee on Transition and Development (ESCTD) took part in the meetings. These meetings were co-chaired by PCNP Chair Prof. h. c. Dr. Karl A. Lamers (Germany) and ESCTD Chair John Spellar (United Kingdom) and hosted by Michal Szczerba, Deputy Head of the Polish delegation.

Mr. Jablonski said the transatlantic community ought to be very concerned about the Kaliningrad build-up and planned mass-scale Belarusian-Russian “Zapad-2021” manoeuvres which will bring an array of Russian forces close to the Eastern borders of NATO.

Jablonski also suggested that the build-up of Russian troops on Ukraine’s eastern border is deeply concerning. Elements of this brewing crisis are similar to what transpired just prior to the invasion in Crimea.

He called on NATO governments to apply significant pressure and more comprehensive sanctions on Russia to impose a cost on Russian actions and to demonstrate allied unity and shared purpose in the face of these provocations.

Other Polish politicians and experts also emphasised the urgency of the Russian military and political challenge. They applauded the Allied decisions to substantially bolster presence on the NATO’s eastern flank, including through the “Four Thirties” Readiness Initiative (having 30 combat ships, 30 land battalions, and 30 air squadrons ready to deploy within 30 days), but urged the Allied planners to work on scenarios for this 30-days period.

Polish interlocutors also urged Allied policy-makers, as part of the 2030 reflection process to act on a number of key recommendations, namely to strengthen the political dimension of NATO, to institutionalise the relations with the EU and to address the challenges to NATO as an Alliance based on shared democratic values.

Mr Jablonski warned that NATO governments need to enhance both societal and military resilience to better cope with hard military threats as well as hybrid and cyber disinformation challenges. “We need effective political deterrence that supplements the military one and makes it more credible both in the eyes of our adversaries and our own societies”, he said. “This instrument can be developed in close cooperation with our like-minded partners, especially the EU.”
Polish interlocutors stressed that Russia will continue its campaign to subvert western democracies, including through funding political parties and election interference. They suggested enhancing the exchange of best national practices in the protection of election infrastructure and ensuring transparency of political campaigns’ funding. They encouraged a more proactive role of the NATO Parliamentary Assembly in protection of election integrity within the Alliance and beyond.

The parliamentarians also focused closely on the situation in Belarus in discussions with Polish and Belarusian experts. The speakers noted that the peaceful political and social mobilization of the Belarusian people following the August 2020 presidential elections have had a transformative impact on Belarusian identity. In a sense, public outrage at the regime and the deep corruption that it has encouraged has forged a strong national identity which itself has now become a factor in the crisis.

One expert suggested that the social delegitimisation of Lukashenko has now reached the point of no return.  There is no possible way for Lukashenko to gain the kind of authority that he would need to govern in a normal fashion. He has now resorted to the suspension of the rule of law and extraordinarily harsh repression. But in so doing, he is only digging a deeper hole for himself and his government. For their part, the Belarusian people are simply fixated on building a new and better Belarus that is democratic and committed to the rule of law. Panelists emphasised that the protest movement in Belarus is not geopolitical and should not be viewed as the choosing between Russia and the West.

Experts warned that Russia is exploiting the weakness of Lukashenko to press its case for deeper integration of the Russian-Belarusian union-state — a project that aims to subvert Belarusian sovereignty and national institutions. They told delegates that sanctions on Russia are needed to signal that this ambition is unacceptable. Simply talking with Putin would be doomed to fail. Stronger signals are needed but the international community must be unified and tough on this matter.

Michal Szczerba (Poland), who is also the ESCTD Rapporteur, has drafted a Sub-Committee report on the situation in Belarus which will be presented at the online Spring Session of the NATO PA in May.

NATO Parliamentarians also discussed Poland’s economic situation in the context of the pandemic. Maciej Witucki, Chairman of Lewiatan (Organisation of Employers), noted that the Polish economy proved to be quite resilient, and the government was open to consulting closely with the business community. Poland chose to take measured and pragmatic decisions on acute issues such as repatriation of elements of production chains back to Poland or regulating 5G networks. The Polish approach combines both the national security considerations and the interests of consumers, Mr Witucki said. He also stressed that the pandemic reinforced Poland’s resolve to transition towards a more digitalised and greener economy.