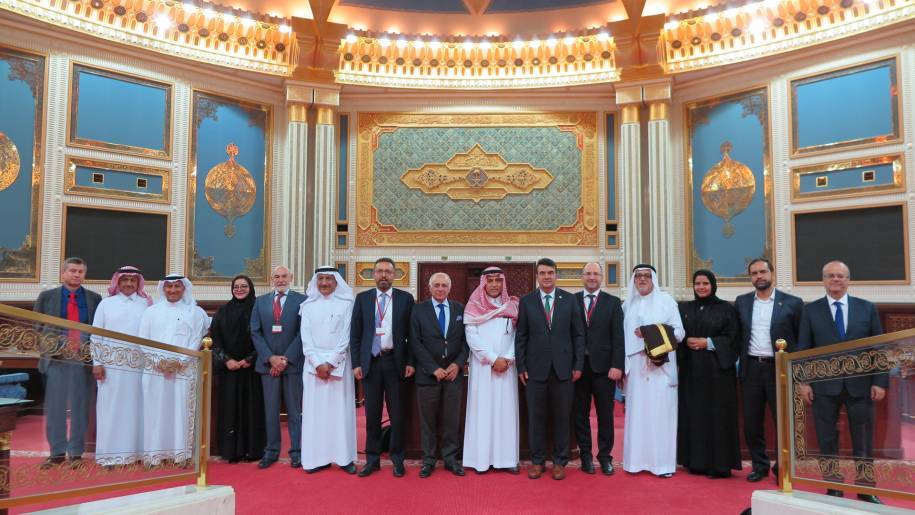 Brussels, 24 April 2018 - Saudi Arabia is facing the dual challenge of engaging in an ambitious reform programme at home while coping with a volatile regional security environment at the same time. These were the key takeaways of the visit by a delegation from the NATO Parliamentary Assembly to the Kingdom from 16-18 April 2018. The meetings covered a comprehensive set of issues that focused on security on the Arabian Peninsula, and the situation in Yemen in particular. The delegation met with senior Saudi officials, including the Custodian of Two Holy Mosques, King Salman bin Abdulaziz Al Saud, the Ministers of Foreign Affairs and the Interior, members of the Majlis al-Shura, senior representatives of the Gulf Cooperation Council and other host country officials.

During the visit host country interlocutors repeatedly emphasised the importance of “Vision 2030”, the ambitious programme designed to reduce Saudi Arabia's dependence on oil revenues and promote wide-ranging social change. Members of the Majlis al-Shura were optimistic that “Vision 2030” will lead to increased transparency and accountability and bring government performance to a higher standard. Diplomatic observers noted that “Vision 2030” can go a long way to modernise the country, though the implementation of the initiative will require considerable effort at a time when Saudi Arabia also faces important security challenges.

Saudi Arabia’s key security concerns remain Iran and the continuing challenge of terrorism. Host country interlocutors consider Iran as the primary source of instability, primarily because of its meddling in the internal affairs of neighbouring countries, its support for terrorist groups and the proliferation of ballistic missiles. Government representatives expressed deep concern about the Joint Comprehensive Plan of Action (JCPOA) which will not deter Iran from developing its nuclear capacities, unless the key issue of the sunset provision and the scope of the inspection regime would be rectified.

During meetings with host country officials, the delegates recognised Saudi Arabia’s pivotal role and contribution to the security of the Arabian Gulf region and to the global fight against terrorism. Saudi interlocutors recognised that the Kingdom had faced serious issues in the past but underlined that the authorities now tackle this challenge on various fronts, on the media, financially, and on the ideological front.

The civil war in Yemen was also high on the agenda during the exchanges. Foreign Minister H.E. Mr Adel Al-Jubeir stressed that Yemen is a war Saudi Arabia did not want but which was imposed on the Kingdom by the Houthi insurgents. However, while the coalition has made progress in Yemen, it has lost the communications battle, the Foreign Minister noted. Major General Fayyadh al-Ruwaili, Chief of Staff of the Saudi Armed Forces, stressed that the forces of the coalition are doing their best to avoid civilian casualties. Government representatives also reminded the delegation that Saudi Arabia is providing considerable humanitarian relief and is doing everything to alleviate the plight of the Yemeni people.

Other issues that were addressed during the 3-day visit included the situation in Syria, the diplomatic crisis with Qatar, and the Israeli-Palestinian peace process. The delegation included eight Parliamentarians from four member countries and was led by Metin Lütfi Baydar (Turkey), Chairman of the Sub-Committee on NATO Partnerships.