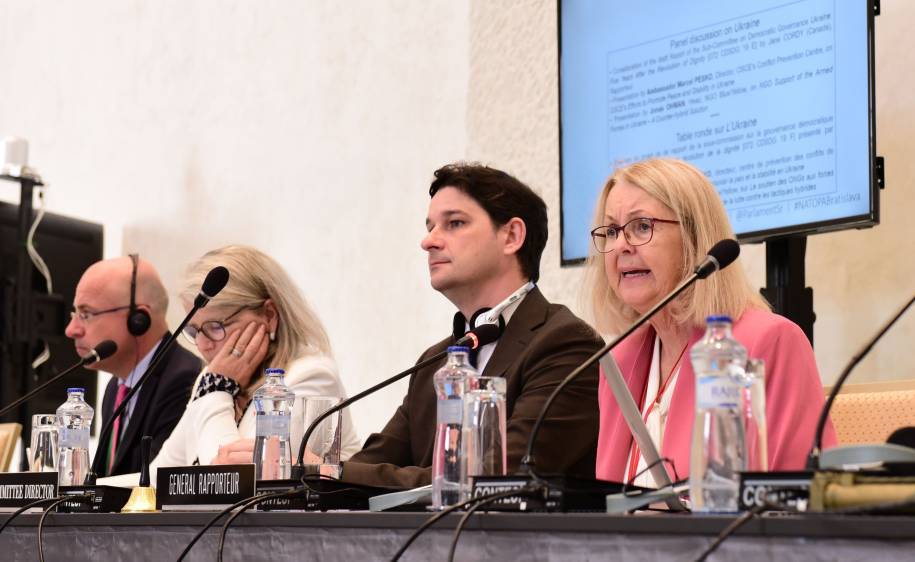 Bratislava, 2 June 2019 – NATO must maintain military and economic pressure on Russia and help reinvigorate the Minsk II process in Ukraine, where talks have been at a standstill for more than two years and a multitude of ceasefire violations occur each day, legislators and experts said Sunday.

“The best response to Russia’s provocative actions for the Alliance is to remain firm and continue strengthening its defence and deterrence capabilities without escalating the already tense relationship,” Canadian Senator Raynell Andreychuk told lawmakers from NATO nations in Slovakia.

Tensions between NATO and Russia have mounted since the Kremlin illegally annexed Ukraine’s Crimean Peninsula in 2014. Allies say Moscow continues to back separatists in eastern Ukraine and undermine the central government.

Russia’s seizure of three Ukrainian vessels and 24 sailors near the Sea of Azov in November has become yet another point of contention.

To deter Russian aggression, NATO has deployed combat-ready troops to the Baltic States and Poland, while member countries and the European Union are using sanctions to persuade Moscow to respect Ukraine’s sovereignty.

Andreychuk told the NATO Parliamentary Assembly’s Political Committee that sanctions should be broadened if Russia meddles with NATO governments and democratic systems.

In the NATO PA Committee on the Civil Dimension of Security, OSCE Ambassador Marcel Pesko painted a bleak picture of Ukraine’s Donbass region. He said that the OSCE Special Monitoring Mission’s mandate was to monitor the ceasefire in eastern Ukraine, “but in reality we are monitoring ceasefire violations”.

“Since October 2016, we haven’t seen real progress on the political track,” Pesko said. “We cannot achieve progress without dialogue”, he added while calling for renewed efforts at the highest levels.

Experts and parliamentarians agreed on the need for an injection of political momentum, five years after the Maidan rallies in favour of European integration.

“This is a crucial year for Ukraine. The country’s strategic course towards Euro-Atlantic integration, chosen by the people five years ago, is being tested by presidential and parliamentary elections,” said Canadian Senator Jane Cordy, presenting a draft report taking stock of developments.

“It is clear that there is frustration and disappointment among the population. Yet it is also clear that Ukraine’s choice for European and Euro-Atlantic integration has been made and will not change in the foreseeable future,” Cordy told the committee. She called on the Euro-Atlantic community not to succumb to “Ukraine fatigue” and to increase support to Ukraine’s reforms and its ability to defend its independence.