Parliamentarians appeal for unity, credibility ahead of July NATO Summit 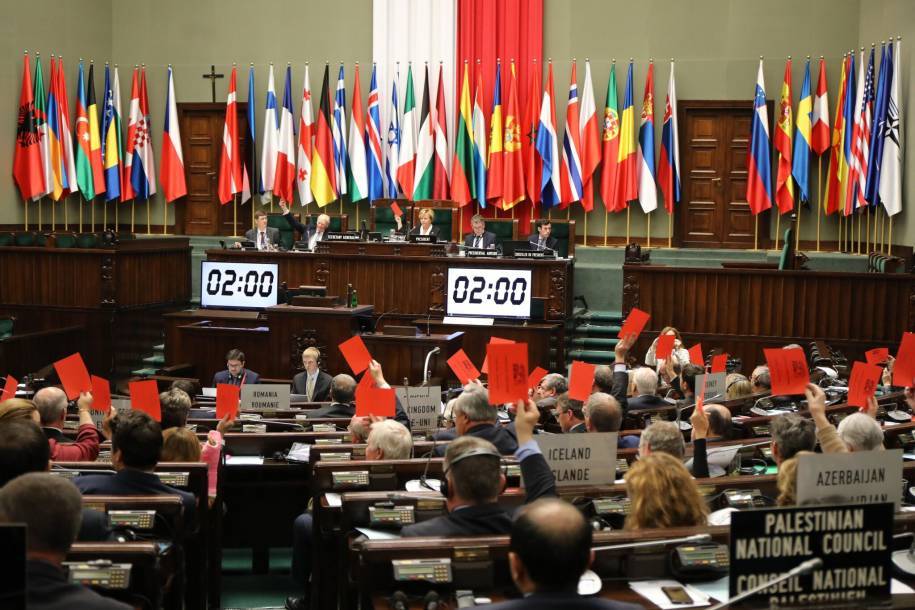 Warsaw, 28 May 2018 – Parliamentarians from NATO nations appealed Monday for Alliance leaders to show unity at their Summit in July and demonstrate that the organisation remains credible in the face of security threats headed by Russia and terrorism.

In a declaration at the NATO Parliamentary Assembly’s Spring Session in Poland, the lawmakers insisted that the Alliance makes “unique and valuable contributions” to tackling complex security challenges and underlined that an attack on one Ally remains an attack on all.

“It’s nothing new that there are disagreements. The strength of NATO is that we have been able to manage those disagreements without weakening the core responsibility of NATO. We are standing united around our core task that we defend and protect each other,” he said.

Polish Prime Minister Mateusz Morawiecki, who will attend the 11-12 July Summit in Brussels, said it must underline NATO’s unity and solidarity. “Our task is to demonstrate to the world that NATO is a cohesive Alliance of 29 countries guaranteeing security,” he said.

Lawmakers urged the leaders to maintain a dual track Russia policy of defence and deterrence to counter Moscow’s efforts destabilise NATO Allies and neighbours, linked with openness to “meaningful dialogue.”

To combat terrorism, the Summit should prepare to transform NATO’s assistance to Iraq into a non-combat training and capacity-building mission to help Iraqi forces deprive the Islamic State group of a foothold in the country.

They urged the leaders to rapidly fill troop requirements for NATO’s military training operation in Afghanistan and to continue supporting the anti-Daesh coalition.

To ensure NATO can adapt to evolving security threats, the 29 Allies were encouraged to live up to their defence spending pledges and move toward military budgets of 2 percent of GDP by 2024, with 20 percent of that to be spent on new capabilities.

“Burden sharing and the fulfilment of the defence spending pledge must be key priorities, not only to ensure that we can afford the necessary defence and deterrence capabilities, but also to preserve the vital transatlantic relationship,” NATO PA President Paolo Alli said, in his last appearance as head of the Assembly. A new President will be elected at the next session in Canada in November.

Some Allies still have not provided NATO headquarters with plans to achieve the military spending goal. Parliamentarians appealed to them to do so as soon as possible.

Their declaration also urged the leaders to give Bosnia and Herzegovina a reform plan to prepare it for NATO membership, and to back Georgia and Ukraine’s hopes of joining NATO.