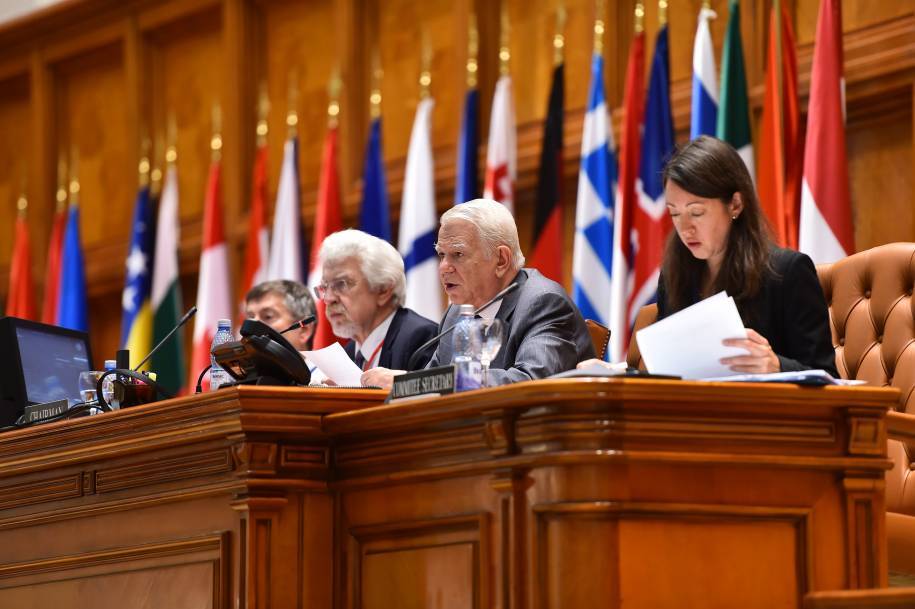 Bucharest, 7 October 2017 – Romania’s Foreign Minister and parliamentarians from NATO nations urged allies Saturday to remain vigilant about political developments and security in the volatile Western Balkans, warning that the incitement of ethnic tension, corruption, misinformation and Russian influence risk sowing instability.
Romanian Foreign Minister Teodor-Viorel Melescanu told members of the NATO Parliamentary Assembly’s Political Committee that the prospect of NATO or European Union membership remains a powerful driver of reform in the region and that their doors must remain open to candidates.
“There is still unfinished business in the Western Balkans and countries in the region are still facing multiple challenges,” he said, adding that NATO and the EU should aim to boost “the resilience of partners in the Western Balkans to internal and external pressures.”
“We have to make sure that progress achieved is irreversible and further consolidated,” he said, during the NATO PA Annual Session in Bucharest.
In a report debated by lawmakers in the NATO PA Economics and Security Committee, British deputy Richard Benyon said that efforts are needed in the region to correct public misunderstanding about the purpose of critical institutions like NATO and the EU.
He is urging allies to reach out to a Balkans media tempted by sensationalism and misinformation because some of it half-truths or distortions undermine public confidence in NATO.
The report warns that the Euro-Atlantic community seems increasingly remote to the region, despite Montenegro recently becoming the 29th member of NATO, joining Albania, Croatia and Slovenia in the Alliance’s ranks.
Debate also addressed the way that ethnic identity has been exploited to foment turmoil in a region already wracked by sectarian and ethnic war in the past, not least in the Former Yugoslav Republic of Macedonia*, which still nourishes hopes of joining NATO one day soon.
Constant vigilance is required to counter such poisonous politics and de-escalate tensions, lawmakers were told. The aim, according to the report, should be to inspire liberal democracy in a region wracked by instability and doubt.
More support is also needed for the judiciary as it undergoes slow but vital reform, as public faith in the region’s institutions wanes, enhancing the appeal of strong leaders with no patience for democratic consensus building.
Benyon warns that Russia sees the entire region as fertile ground for driving a wedge between NATO nations and partners, and has waged disinformation campaigns and even interfered in elections in Montenegro in an effort to create new frozen conflicts.

* Turkey recognises The Republic of Macedonia with its constitutional name.