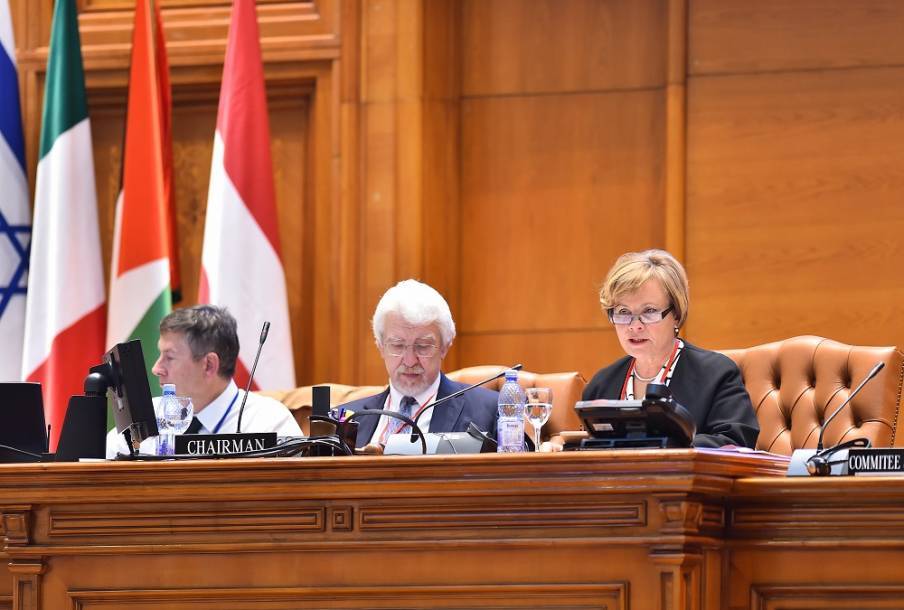 Bucharest, 7 October 2017 – Lawmakers from across the NATO Alliance expressed concerns Saturday about tensions around the Black Sea and urged Allied governments to strengthen efforts to maintain stability and democracy in the region.
“The deterioration of the global security landscape in recent years undermines efforts to develop regional cooperation and regional identity in the Black Sea,” German parliamentarian Ulla Schmidt told the NATO Parliamentary Assembly.
“Military build-up is approaching dangerous levels, multiple conflicts remain unresolved and Russia has substantially increased its foothold in the region,” she told the Assembly’s annual session in Bucharest. “The international community – particularly the EU and NATO – should place the region higher on their agenda in order to reverse negative trends and reignite regional cooperation.”
Schmidt drafted a resolution, expected to be adopted by the assembly on Monday, that urged the Allies to use “all available political and diplomatic means to seek de-escalation of tensions in the Black Sea,” while reaffirming the NATO PA’s “unequivocal condemnation of Russia’s continued violations of Georgian and Ukrainian territorial sovereignty, severe human rights violations in the occupied territories and efforts to intimidate and destabilise its neighbours.”
Romanian Defence Minister Mihai-Viorel Fifor told the Assembly that Russia had shifted the balance of power in the region, creating a “fluid and unpredictable” security situation.
“The most important influence on the security of the Black Sea is generated by Russia’s new assertive approach and aggressive behaviour in relation to its neighbours and towards NATO and the EU,” Fifor said. “The involvement of the Russian Federation in the Ukrainian crisis represents the strongest degradation of the European order system with international impact, since the end of the Cold War.”
The Russian build up in the Black Sea has implications beyond the region as Moscow seeks to further expand its influence, said Romania’s Foreign Minister Teodor-Viorel Meleşcanu. “This build up in the Black Sea is practically the departure point for an important presence in the eastern Mediterranean and in the Middle East as a whole,” he said.
Former foreign minister of Romania Ambassador Sergiu Celac noted that regional co-operation in the Black Sea has been undermined by geopolitical prerogatives. “However, it is more important than ever to keep these regional institutions alive. Even with reduced expectations, these institutions will be handy when the political environment improves,” Celac said.
The wider relationship between NATO and Russia was taken up by Lithuanian lawmaker Rasa Jukneviciene who drafted a report, on the issue, that was adopted in Bucharest. “NATO Allies need to remain committed to a strong deterrence posture and stand up to Russia’s continuing provocations and aggressions against NATO partner countries, particularly Ukraine and Georgia,” Jukneviciene said.
Two of the expert speakers who briefed the Assembly had more positive messages.
“Russia is no longer a threat to EU gas supplies,” said Prof. Andreas Goldthau, of Royal Holloway University of London, who spoke on Europe’s Energy Security. Goldthau said the European Union had successfully put in place infrastructure and policies to break dependence on Russian supply. “Nominally, the EU could replace Russian gas tomorrow with LNG (Liquid Natural Gas) imports,” he said.
More broadly, Mark Galeotti, Senior Researcher and Coordinator at Centre for European Security, at the Institute of International Relations in Prague, contented that Russian efforts to “divide, distract, dismay and deter,” the West were failing. “I believe that we are winning,” Galeotti said. “I’m struck by a very definite current within the military and national security establishments in Russia that is increasingly despondent.”